A new kind of care 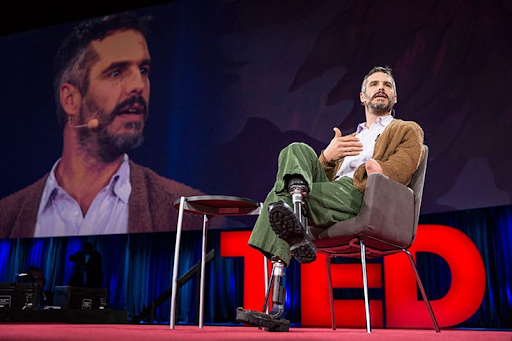 BJ Miller is a maverick in every sense of the word

...writes his emails in beautiful prose and much to my amusement, mostly lower case letters.

Zooms around in a motorcycle custom fitted to his appendages,

And is starting a new venture to tackle holistic care for the sick and dying in an entirely new way.

Across all our interactions, it’s clear how intentional BJ is with the aesthetic and language he uses in his practice and work.

And this attentiveness to detail and symbolism comes as no surprise since he was an art history major at Princeton,

So it was no surprise to learn about the meaning of “Mettle Health”, the name of his new company (https://www.mettlehealth.com/).

So fast forward 4 years from the first time I heard BJ’s interview on the Tim Ferriss show, and 3 years since we first became friends, I’m diving in to promote his new project, because it’s the least I could do for such a crucial mission.

America hasn’t really known how to take care of the sick and dying well even BEFORE COVID.

There are number of potholes along the road to care that people get tripped up on; space that’s not made to care for people holistically.

So throw in a global pandemic, an overly taxed medical workforce, not enough supplies and time to get people on respirators, or proper funeral services...

You could say we have a problem.

Within SPECIFICALLY palliative care, (which is meant to relieve suffering for anyone dealing with illness/sickness), there are a few clear issues with treatment:

THIS IS WHERE METTLE HEALTH COMES IN:

Mettle circumvents the pitfalls of the traditional healthcare system by simply operating outside of it.

BJ and his team provide palliative care without a doctor’s referral to anyone in the US via phone or video chat.

The way I see it, they’re taking the “private practice approach” that many therapists do when delivering care to those in need, that can’t be bothered to go through the bureaucracy and restrictions of insurance billing.

They step in not as a full medical service (they do not prescribe or become someone’s primary doctor).

In this way, they are more of a social service staffed by medical professionals.

What I LOVE most is that having ancillary services like theirs is that it can begin to shift public willingness to get real help with medical complexities.

Right now the “commonplace services” to engage in with a serious illness are hospitals, your estate lawyer, oh yeah and the funeral home.

Not a lot of room for nuance there.

So I’m jazzed for Mettle Health to come in and establish a new norm that bringing in palliative care experts is a respected, accessible, and COMMON thing to do.

The one caveat I’ll add is the service isn’t cheap. It’s $220 an hour long consultation and $495 for a bundle of three.

But when you consider two things:

I think it’s a fair bet.

I’ve also been told they are encouraging people who may have an economic hardship to reach out (info@mettlehealth.com) and they’ll figure a way to make things work; they’re creating a sliding scale system--which is AWESOME and rare to see from any specialty provider.

WHO EXACTLY IS METTLE FOR?

The lazy answer would be “everyone”.

And while I totally believe this, I’m also a fan of “niching down”.

So asked BJ, Sonya, and the Mettle team to help clarify their target market.

They told me this.

“While there is no one typical client, examples of clients include: someone who’s received a diagnosis and wants help approaching decisions about treatment; caregivers who find that what they want for the patient differs from what the patient wants; a patient who has made significant decisions about care, but is second-guessing those choices and looking for reassurance; or a caregiver dealing with regret or remorse who needs help coping.”

They continued by describing they want to target the “sandwich generation” (according to oxford):

“a generation of people, typically in their thirties or forties, responsible for bringing up their own children and for the care of their aging parents.”

Being sandwiched between both those intergenerational needs is definitely a case for enlisting some extra help to navigate sticky situations.

PEDAL TO THE “METTLE”

The world will never be the same after this health crisis.

Polítics, economics, technology, culture; have all been irrevocably altered.

One of my hopes is that people eventually engage with palliative care in the same way you might with a family doctor; Someone to check in with you on the equally important emotional side of any bodily stress or injury

Another analogy that comes to mind is; it’s quite commonplace now for doctors to get specialists to guide them through the monitoring and eventually the delivery of a child.

So why not all the other life stages AFTER birth?

One of the things that the Mettle health team intends to get across about the service is that palliative care is for anyone who is experiencing emotional, practical, spiritual or existential suffering due to a diagnosis or illness - patient or caregiver or partner or friend or family member.

Palliative care is best utilized when accessed WAY before any type of end of life conversation happens. This is a messaging problem around “Palliative Care” and “Hospice” in general, so it’s very much swimming against the current asking people to sign up for this on their own.

Whatever a person’s mindset or belief system, palliative care has something to offer.

And in a world where our agency is threatened every day, I’m all for more choices.